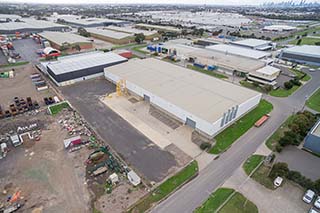 Originally occupied by Oil & Marine Engineers OPC Australia P/L – the property at 7 – 11 Ives Road, Altona North has recently been leased by Richard O’Callaghan of Facey to a concrete engineering business which will utilise the three five-ton and one ten-ton gantry cranes, huge yard and drive through access. The new business is taking advantage of the significant infrastructure projects currently underway and funded by both the Victorian and Federal Governments.

Situated on the corner of Ives and Baldwin Roads, the property boasts an office and warehouse with a total area of 5,580m² on land of 11,940m². The warehouse has a hook height of approximately 6.5 metres and is accessed via four roller shutter doors.

There were no incentives included in the letting, which represented $63.40 per annum plus outgoings and GST. There were fixed and market reviews throughout the term.

“As Ives Road was listed through a number of International agents, there was strong competition for the asset when the lease was executed”, said Facey’s, Richard O’Callaghan.

The Present is BRIGHT

Build it and they will come!