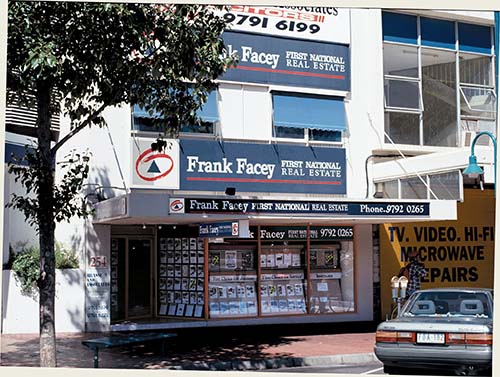 Frank Barrett is one of Facey and Parklea’s longest standing employees, starting work for Andrew Facey in 1986 and still working as an accountant for Parklea and Facey today.

When Did You Start Working For Facey?

In January 1986 I responded to a local newspaper advert – of course Andrew wanted me to start straight away – but I did have to give some notice.

Looking back I laugh at Andrew’s interview question of pointing at a computer across the hallway and stating “you would be able to use that wouldn’t you.”

It was a real estate program for trust accounting which receipted, paid invoices, generated statements, monthly reports and reconciliations all using a massive 10MB Winchester Hard Drive and 8” Floppy Disks for backups.

I was one of the few employees in the 15 odd staff that did not have the job by knowing Andrew directly in the first place – it is not nepotism, he just goes out and finds the right person. The same applies at Parklea today – only Natarsha was not cherry picked – she applied and is great, all of the others at Parklea have been selected directly by Andrew or highly recommended by a colleague.

In Facey early days the same theory applied with Josh and Mark as classic examples. Andrew chose them and a couple of salesmen who have since retired or left.

Dynamic is one word I could use – he does not let an opportunity go by – he cannot sit still, metaphorically. Parklea has enough parcels of land to develop for 20+ years yet I could confidently predict that we will be making an arrangement to buy something else within a year or so.

Sometimes Judy (Ife) would have to create a drop file, set up with just a name, property details etc. no money has changed hands, nothing signed – years later Andrew would say ‘where’s that file Jude? – and we’d end up doing the deal.

It has been said “he never forgets”. If you help him, respect him, and do what he asks, Andrew will always remember and reward you somewhere, sometime.

What have you enjoyed about your time with Facey/Parklea?

The staff. If you have great employers who can relate, explain by words, by example, and train the staff that way, the employees can embrace and follow their lead. I have never felt like that I dread going into the office day after day, thinking – when’s the weekend coming up? The personalities of Josh, Mark, and Andrew are different but overall they embody the Facey Way.

Why do you think the business has stood the test of time?

For Facey, Josh and Mark have developed a real estate office that will not break the rules or manipulate people. Their ethics and methods have trickled down and made the office what it is today. From 12 staff in 1996 it has more than doubled in staff and at least tripled in activity.

Andrew to a young trainee salesman who had been in our employ for about a year in property management in the residential office:

Luckily he also said “you have a hole in your shoe”, otherwise young Mr Todd may have returned with a couple of novels from Angus & Robertson.

When Andrew calls or starts a conversation with – “ I tell you Frankie boy” he has some good news, you know he has done a deal or is working on one.

I remember Mark (Bond) in short pants, vacuuming. He was “a young lad” recruited back in 1993, not for his table waiting skills, or his unreliable car, but for the potential.
In the very early days he could find the early Saturday morning starts hard however under Terry and Coach Josh, he quickly became the person to refer friends or acquaintances to even before he became a shareholder.